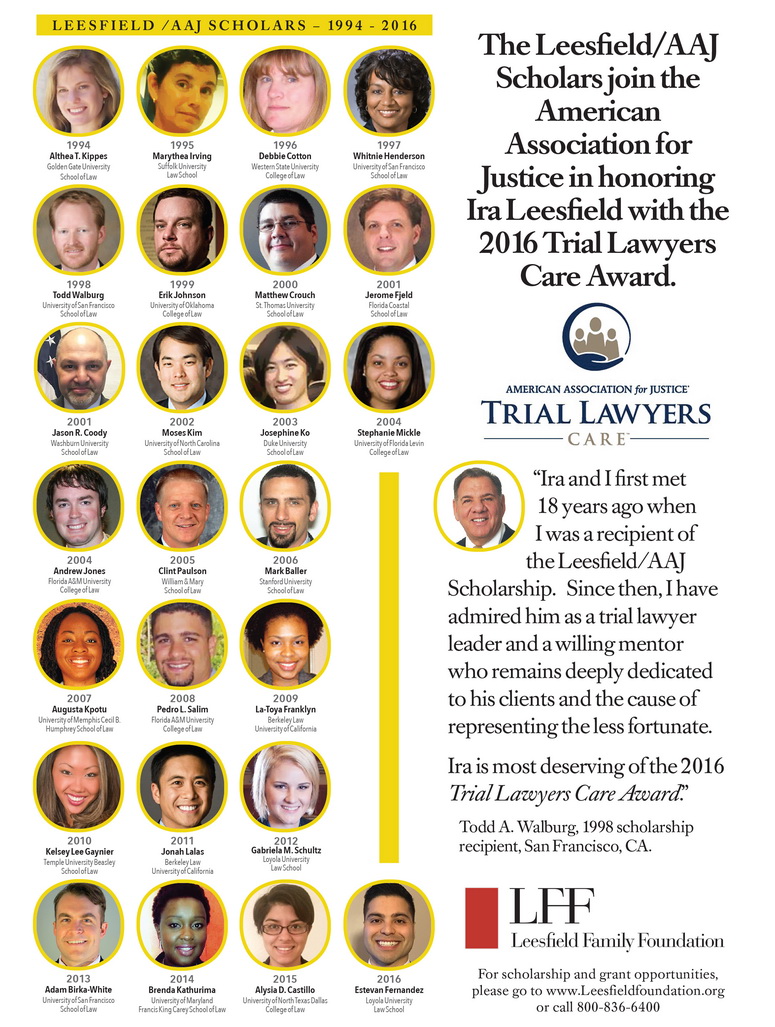 On Friday, July 22, 2016, at its annual convention held this year in Los Angeles, CA,  the American Association for Justice (“AAJ”) recognized Ira Leesfield for his extraordinary, consistent and long term dedication to help the less fortunate Americans and the South Florida community through difficult times.    The organization’s prestigious Trial Lawyers Care Award is presented to trial lawyers who have made a difference contributing to their communities through volunteer and charitable activities that serve the public good.

Through the Leesfield Family Foundation, established in 1990, Ira Leesfield has funded over 25 law school scholarships around the country, as well as a quarter of a century commitment to women and minority law students.  The Leesfield Family Foundation has dedicated financial assistance to dozens of local, national and international women’s and children’s non-profit organizations such as Voices for Children; Big Brothers/Big Sisters of Greater Miami; Children’s Home Society of South Florida; The Sundari Foundation; Women in Distress; Miami Children’s Health Foundation; Women’s Foundation of Miami-Dade County; National Council for Jewish Women; Lawyers for Children America; The Tomorrow Fund; or Fatherhood Task Force of South Florida.

In June, the Foundation reacted quickly to the terrorist massacre in Orlando, Florida by supporting OneOrlando Fund, to assist victims and families of the Orlando/Pulse tragedy, followed timely aid to the Dallas Foundation Line of Duty Fund for police officers killed during an attack of a peaceful protest in Dallas, TX.  Most recently, the Foundation was among the first responders to provide financial support to victims of the Louisiana Floods through www.VolunteerLouisiana.gov.  That effort was consistent with an immediate response to victims of Hurricane Sandy, victims of the Tennessee floods and the earthquake in Haiti.  In all, over 90 organizations have received financial support to reconcile economic disadvantage.   Leesfield was a scholarship recipient in college and law school, and feels compelled to “pay it forward.”  “When I was a student, people were generous and concerned about me and my future. Without their help, I probably would not have gone to college or law school,” said Leesfield, who worked after-school and weekend jobs to help his single mother in keeping his family together.

To quote AAJ President Larry Tawwater, “Ira has made a commitment to giving back to people who may need some extra help, and he has been there for them for more than 20 years. His dedication and consistency has made a positive difference in so many peoples’ lives.”

To assist students who may not be able to afford law school, Leesfield has funded over 26 scholarships awarded at AAJ conventions.
“It would be inconceivable for me to go through life, do well as a lawyer, and not give others an opportunity to do the same.” Leesfield said. “Trial lawyers work every day with people who are vulnerable. We understand that there are many in the world who are in need, and we want to help.”