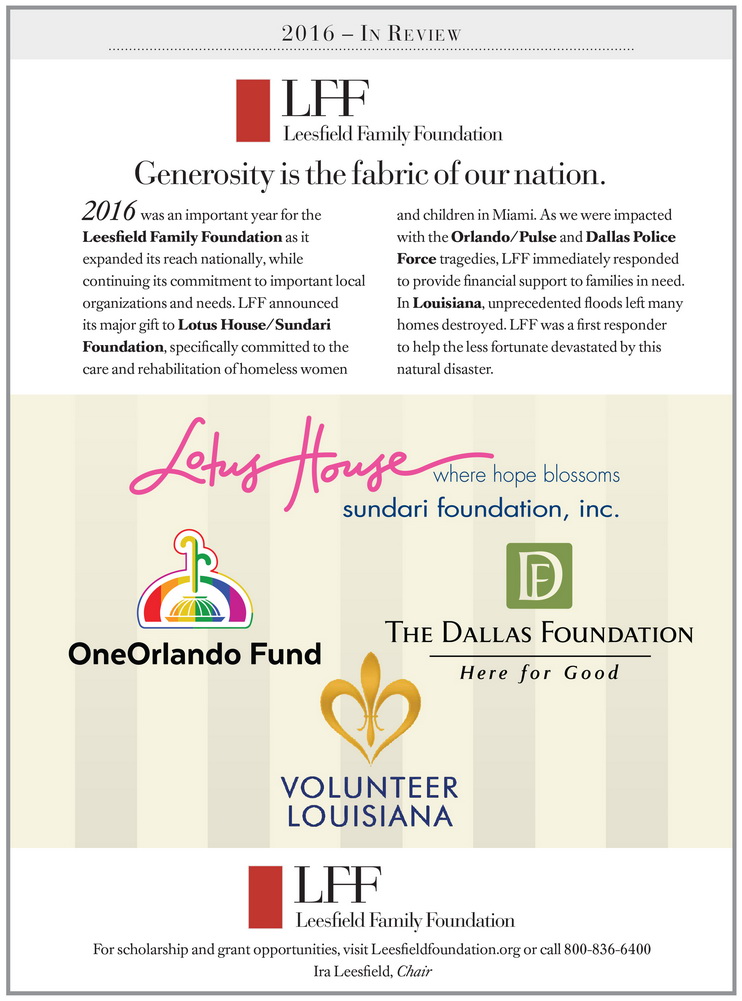 This was an important and active year for the Leesfield Foundation as it expanded its reach nationally, while continuing our commitment to important local organizations and needs.

Our biggest event this year was the Foundation’s major gift to the construction of the Lotus House.   The Lotus House/Sundari Foundation is specifically committed to the care and rehabilitation of homeless women and children in Miami.

The Lotus House has begun a major reconstruction of its new facility which will accommodate nearly 500 needy and deserving women and children of Miami-Dade County, allowing improvement and a fresh start of their lives.   “The generous donation from the Leesfield Family Foundation provides essential resources so the women, youth and children Lotus House serves can heal, grow and blossom into who they are meant to be.  We are grateful beyond words for this truly life saving support.,” said Constance Collins, President and Executive Director.

On November 12, 2016, the Leesfield Family Foundation incorporated the birthday celebration of Chairwoman, Cynthia Leesfield, into the Lotus event, a double festivity with over 400 friends, local dignitaries and supporters in attendance from Miami-Dade County.

Closer to home, the Foundation again supported the Children’s Home Society of Florida (Miami-Dade) “Claws for a Cause” event at Joe’s Stone Crab Restaurant recommitting its dedication to one of the oldest and largest local children’s organization, offering critical services to over 6,000 neglected and abused children in Miami-Dade County.    Once again, the event was a huge success and we were so proud to be part of this annual event.

We were pleased to again support of the Overtown Youth Center, founded in 2003 by Hall of Fame basketball player, Alonzo Mourning and real estate developer Martin Margulies in the hopes of creating a safe haven for children living in Overtown.  In the past, and again in 2016, the Leesfield Family Foundation undertook support and encouragement of this important community organization which promotes lifelong learning and success for our inner-city youth.  “Our dedication remains strong and continuous as this organization serves an important role model for our community disadvantaged youth,” said Ira Leesfield, President.

LFF announced its community grant to Lawyers for Children America (LFCA), a non-profit child advocacy organization which provides pro bono legal representation to vulnerable children who have been removed from their homes due to abuse and neglect by their loved ones. LFCA has more than 300 volunteer lawyers, who donate their valuable time to help improve the lives of thousands of abandoned children in our community providing them with legal representation throughout the legal foster care process.

As we presently face an uphill battle with our nation’s immigration system, the Leesfield Family Foundation was honored to support the very important work of Americans for Immigrant Justice and its Executive Director, Cheryl Little, Esq. Since its founding in 1996, Americans for Immigrant Justice has served over 90,000 immigrants from all over the world, protecting and promoting basic human rights, advocates for improved immigration policies and practices through impact litigation, and provides free legal assistance to vulnerable, low-income immigrants and in particular, families at risk of separation.  “We are honored by your support which will serve as an inspiration to others who share our commitment to ensuring justice for all,” said Cheryl Little, Executive Director.   We congratulate this organization for its tireless efforts and extensive involvement in such an important national issue.

The Leesfield Family Foundation was able to instantly respond to the horrific Orlando/Pulse tragedy where so many families were impacted and left to take care of medical and funeral expenses as a result of the mass murder of innocent Central Floridians.  “With a strong law office presence in Central Florida and so many wonderful people in need, this was a natural for the Foundation’s response, said Jennifer Leesfield,” Foundation Director.  Our hearts go out to the innocent victims of this tragedy.

Outside of Florida, disaster struck in Louisiana with unprecedented floods and destruction of life and property.  Many residents of Louisiana were left with nothing.   Their homes were destroyed, belongings washed away and their hopes temporarily dashed.  The Leesfield Family Foundation was one of the first responders to provide financial support to the victims through www.VolunteerLouisiana.gov   allowing them to begin the process of putting their lives together.   Whenever possible, our Foundation will help those less fortunate who are suddenly impacted by natural disasters.  Our earlier response to Hurricane Sandy in New York/New Jersey, brought about overwhelming gratitude and fulfillment from helping those unexpectedly struck by disaster.

The Dallas Police Force was shocked and grief stricken by the mass shooting of five police officers, honored men in uniform, during a peaceful protest.   The law enforcement community needed to know that Americans care and would respond quickly and with warmth.   The Leesfield Family Foundation was honored to participate in the support of the families of the fallen public servants.   Our thoughts are always with their families.  “On behalf of the Dallas Foundation, we would like to thank you for your contribution to the Line of Duty Fund.  The outpouring of generosity brought forth from the July 7th tragedy is truly heartening,” Mary M. Jalonick, President and CEO.

Congratulations is in order to our President, Ira Leesfield.   This past summer, the American Association for Justice, the nation’s largest trial lawyer organization, recognized him for his extraordinary, consistent and long-term dedication to help the less fortunate Americans and the South Florida community through difficult times.

The organization’s prestigious Trial Lawyers Care Award is presented to trial lawyers who have made a difference, as has Ira Leesfield, through the Foundation, by funding over 25 years of law school scholarships around the country, as well as a quarter of a century commitment to women and minority law students, in addition to dedicating financial assistance to dozens of local, national and international women’s and children’s non-profit organizations.

Leesfield was a scholarship recipient in college and law school, and feels compelled to pay it forward. “When I was a student, people were generous and concerned about me and my future. Without their help, I probably would not have gone to college or law school.  It would be inconceivable for me to go through life, do well as a lawyer, and not give others an opportunity to do the same.  Trial lawyers work every day with people who are vulnerable. We understand that there are many in the world who are in need, and we want to help.” said Leesfield, who worked after-school and weekend jobs to help his single mother in keeping his family together.

“Ira has made a commitment to giving back to people who may need some extra help, and he has been there for them for more than 20 years. His dedication and consistency has made a positive difference in so many peoples’ lives,” said Larry Tawwater, President of AAJ.

The Leesfield Family Foundation’s Deep Support to the People of Ukraine with Food and Supplies
May 4, 2022

Update on the Foundation’s Humanitarian Relief for War-Torn Ukraine
April 5, 2022